Many U.S. consumers spent this year’s Black Friday sales event shopping from home on mobile devices. That led to first-time installs of mobile shopping apps in the U.S. to break a new record for single-day installs on Black Friday 2020, according to a report from Sensor Tower. The firm estimates that U.S. consumers downloaded approximately 2.8 million shopping apps on November 27th — a figure that’s up by nearly 8% over last year.

However, this number doesn’t necessarily represent faster growth than in 2019, which also saw about an 8% year-over-year increase in Black Friday shopping app installs, the report noted. This could be because mobile shopping and the related app installs are now taking place throughout the month of November, though, as retailers adjusted to the pandemic and other online shopping trends by hosting earlier sales or even month-long sales events. 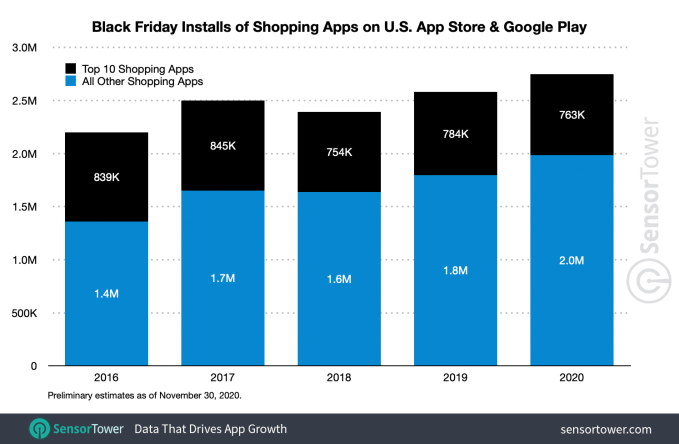 The data seems to indicate this is true. Between November 1 and November 29, U.S. consumers downloaded approximately 59.2 million shopping apps from across the App Store and Google Play — an increase of roughly 15% from the 51.7 million they downloaded in Novenber 2019. That’s a much higher figure than the 2% year-over-year growth seen during this same period in 2019. 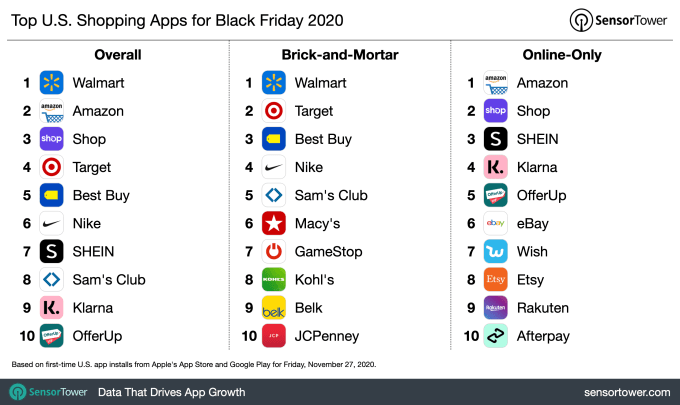 Because the firms are only looking at new app installs, they aren’t giving a full picture of the U.S. mobile shopping market, as many consumers already have these apps installed on their devices. And many more simply shop online via a desktop or laptop computer.

To give these figures some context, Shopify reported on Saturday it had seen record Black Friday sales of $2.4 billion, with 68% on mobile. And today, Amazon announced its small business sales alone topped $4.8 billion from Black Friday to Cyber Monday, a 60% year-over-year increase, but it didn’t break out the percentage that came from mobile.

Sensor Tower and rival app store analytics firm App Annie largely agreed on the top five shopping apps downloaded this Black Friday. They both saw Walmart again beating Amazon to become the most-downloaded U.S. shopping app on Black Friday — as it did in 2019. The two firms reported that Amazon remained No. 2 by downloads, followed by Shopify’s Shop app, then Target. However, Sensor Tower put Best Buy in fifth place, followed by Nike, while App Annie saw those positions swapped. 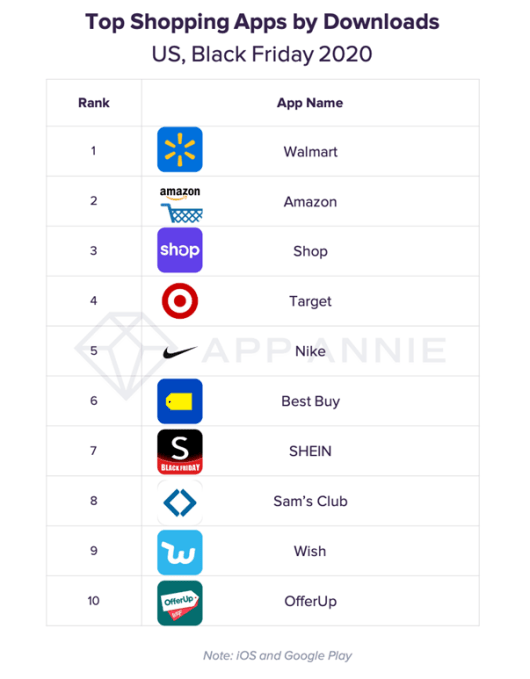 The pandemic’s impact may not have been obvious given the growth in online shopping this year, but the recession it triggered has played a role in how U.S. consumers are paying for their purchases. “Buy Now, Pay Later” apps like Klarna were up this year, even breaking into the top 10 per Sensor Tower’s data. The firm also noted that many new shopping apps launched this year focused on discounts and deals, and retailers ran longer sales this year, as well.